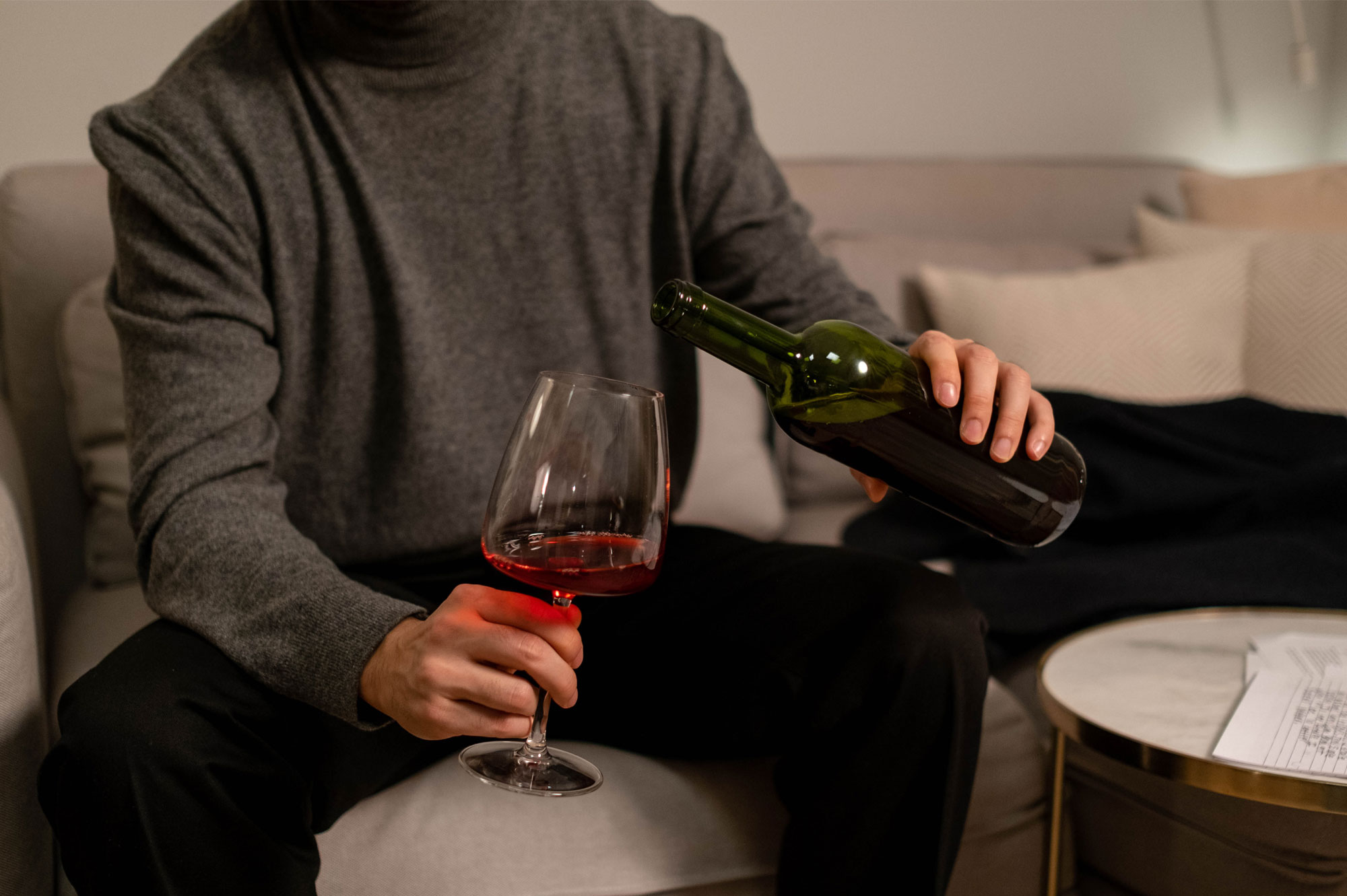 This entry was posted in Addiction & Substance Use Disorder, Addiction Treatment on June 13, 2022 by Kelsey Bond.

Do I have a drinking problem?

Drinking alcohol is a staple of many cultures around the world. Many people have a glass of wine with a meal, a beer while watching the game, or sip cocktails to unwind on vacation. The stereotypes of “wine moms” and “beer bros” are so prevalent that they seem harmless. If alcohol is such an important part of our culture, surely indulging can’t be a bad thing.

But if you drink frequently, it’s a good idea to ask yourself, “do I have a drinking problem?”

Numbers, however, are just part of the big picture. Psychological and behavioral factors should also be considered if you think to yourself, “do I have a drinking problem?” Below are the top ten signs that your alcohol use could indicate a larger drinking problem.

You Drink More Than Intended

Is this a common scenario? You go out for happy hour and intend to have one drink and an appetizer, but you leave the bar in a cab after three or four rounds? Or you pour yourself a glass of wine with dinner, but wind up finishing the entire bottle? Drinking more than you intend is a symptom of an alcohol problem. It indicates an issue with stopping or drinking in moderation, as once you start, you find it difficult to put the glass down.

You Need to Drink More to Feel the Same Effect

Have you noticed that your alcohol tolerance has increased? Did you used to feel buzzed after two beers, but now you need three or four to achieve the same feeling? Studies have shown that alcohol tolerance can be determined by genetic factors to an extent, but increased tolerance is usually an indication of prolonged and continued consumption.

An alcohol problem isn’t necessarily measured by the time spent with a bottle or glass in your hand. If you find yourself losing time due to shopping for alcohol, thinking about drinking, and dealing with the physical symptoms after the fact, then it can be an indication of a problem. Recovering from a severe hangover several times a week takes a lot of energy, and if you find yourself feeling sick from alcohol consumption often, you may have a drinking problem.

You Choose to Drink Over Other Activities

Or conversely, you choose activities based on whether or not alcohol will be present. If you find yourself turning down activities you once loved in favor of going home to drink or stopping at the bar, it can indicate a developing dependence. You should be able to enjoy activities without the presence of alcohol.

You Turn to Alcohol to Self-Soothe

If you have a stressful day at work, do you immediately come home and pour yourself a drink? Do you drink when you feel sad or angry, or when you want to forget something? An occasional drink as a response to stress, anxiety, or other negative emotions isn’t necessarily indicative of a problem. However, if this is a repeated pattern, or if you find yourself regularly drinking to excess to cope with negative feelings, you may be developing a dependence on alcohol.

You Feel Cravings or Experience an Obsession With Drinking

Do you find yourself craving that first sip of your drink of choice? Do you count down the minutes until you leave work so you can pour yourself your favorite drink? If you experience obsessive thoughts about alcohol or physical symptoms of cravings, it can indicate that your body is developing a dependence on alcohol.

You Hide Your Drinking From Friends or Family

Are you a master of deceit? Do you have hidden bottles of alcohol around your house, where your family won’t find them? Do you pour water into a vodka bottle to hide how much you’ve consumed from view? Do you tell people you’ve only had one or two drinks, when you’ve actually had several?

Being dishonest about your alcohol consumption with your loved ones is an indication that you could have a problem. You may be aware that your drinking could cause concern, or that if they knew, they would try to talk to you about it. You may not want them to worry, or you may think that you’re not “that bad”, but lying and omitting information about your drinking can indicate a problem.

You Experience Negative Personal and Professional Repercussions From Alcohol Use

If your friends and family are aware of your drinking habits, you may have encountered some uncomfortable conversations. They could express concern or even anger, or threaten to cut off relationships if you don’t stop drinking. You may also have experienced repercussions at work, such as reprimands for calling off sick often with hangover symptoms, not performing well due to hangover symptoms, or being late or missing deadlines because you were drinking the night before. You may have even lost your job due to your drinking habits. If any of these personal or professional consequences have occurred, this is a concerning sign you may have a drinking problem.

Alcohol consumption is linked to a lowered inhibition, which leads to riskier behaviors. Have you gotten behind the wheel even though you’ve had a few drinks? Have you taken actions you later regretted, such as having unprotected intercourse, trying other drugs or substances, or getting into fights with friends or strangers? Have you gambled or shopped impulsively online after drinking a bottle of wine? If you find yourself taking more risks than usual when under the influence, you could likely have a problem with alcohol.

How to Get Help with Your Drinking Problem

If you have experienced one or more of the items in the list above, know that you are not alone. More than 6% of U.S. adults have been diagnosed with Alcohol Use Disorder. A dedicated alcohol rehab facility like The Ridge can help you detox from alcohol safely, and get your life back on track. The journey to sobriety may be difficult, but the caring professionals at The Ridge are here to help. Get in touch with us today to learn more about our residential and outpatient alcohol treatment programs.